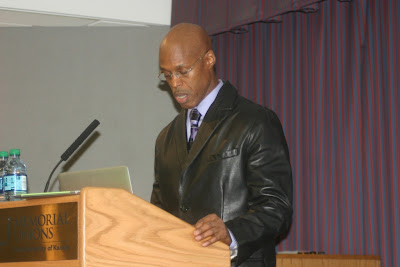 Professor of African and African American Studies TonyBolden is certainly a social artifact at the University of Kansas. By social artifact, I mean a witness to numerous social and artistic developments in black culture, a poet, a critic of black writing, as well as a mentor to undergrad and graduate students.
Bolden is a leading figure on campus, responsible for organizing events that integrate classroom learning and real world experiences. His annual public forum, Make It Funky, saw its third iteration this year on November 10 here at KU. Following suit of his book Afro-Blue which interrogates African American poetry, Make It Funky III addressed the question “Is rap music poetry?” This event was probably the most successful, yet. So successful, that if you arrived to the event “on-time,” you probably had to stand because there were no more available seats
I had the privilege to participate in event as respondent to the featured lecturer Professor Adam Bradley. In Bolden’s own words, “I always include students in anything I plan. It offers a chance for everyone to learn. Students learn from the professors. Professors learn from the students. It’s a collaborative community.”
Other panelists included, Professor Howard Rambsy II (Associate Professor of English, SIUE), Professor Nicole Hodges-Persely (Assistant Professor of Theatre, KU), and Glen North (Poet and Education Program Manager of American Jazz Museum, KC). Each panelist presented an alternative perspective that identified overlaps between rap music and poetry. Ultimately, the panelists pushed for those in attendance to understand that scholars of poetry and fans of rap music engage in similar intellectual practices as they analyze and interpret lyrics of rap/lines of poetry.
Professor Bolden reminds us that there are still far more conversations to be had about the state of black writing and music. For instance, Professors Bolden and Maryemma Graham organized a follow-up conversation (via skype) with Professor Bradley. Professors at KU similar to Bolden and Graham remind students like me of the importance of continued engagement in black studies.
The links below offer a brief video recap of Make It Funky III.
Make It Funky III
Make It Funky III (Panel Overview)

[Related: A 2011 Recap of Public Events]
The event was also sponsored by Project on the History of Black Writing, the Provost’s Office of Diversity and Equity, the College of Liberal Arts and Sciences, the Hall Center and the Departments of English.